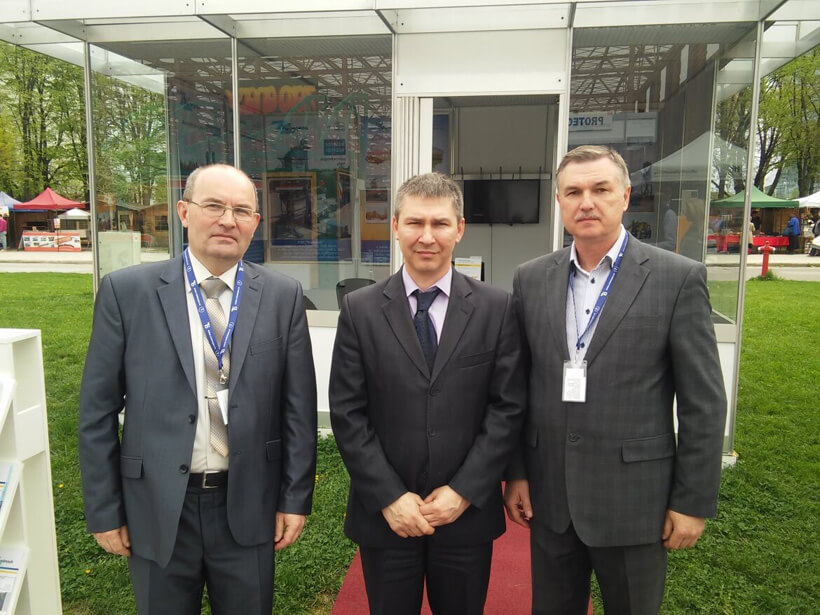 The traditional International Building Exhibition “Construct Expo 2016” was held in Bucharest (Romania) from 07.04.2016 to 10.04.2016. This year the exhibition was attended by over 150 exhibitors from more than 20 countries of the world. Given the particular importance of this direction, PJSC "Kredmash" took part in this exhibition for the first time.

Today, the road construction industry in Romania has a construction boom - modern roads connecting Romanian cities have been built and are being built. The state program of the roads construction in Romania until 2035, carried out with the support of the European Union, foreseen the construction of the largest autobahns: port Constanta - the border of Romania/Hungary; Bucharest - Kishinev, as well as the construction of local municipal roads and access roads, on which can be demanded units of PJSC "Kredmash" with a capacity up to 80 tons/hour.

PJSC “Kredmash” took part in the exhibition together with the dealer in Romania the company “VIKOS INPEX UTILAJE SRL”, which not only supplies spare parts to already operating plants in Romania, but also actively participates in tenders for the supply of new models of asphalt mixing plants. The main requirements of tenders in Romania are high-quality asphalt mixture and use of energy-saving technologies.

During the exhibition, the dealer of PJSC "Kredmash" company "VIKOS INPEX UTILAJE SRL" together with the representatives of PJSC "Kredmash" held over a hundred meetings with potential buyers of asphalt mixing plants and considered a large number of commercial proposals.

The first secretary of the Embassy of Ukraine in Romania B. Patrash also visited the stand of PJSC "Kredmash", who told a lot of interesting things about the development of the road sector in the Romanian economics and was very interested in the product samples produced by our company.

We hope that the share of asphalt mixing plants supplied to Romania will increase, if the plant meets the market requirements. We have all the possibilities for this.