The national rating “100 best goods of Ukraine” annually determines the winners of the competition for the best domestic goods, works and services. This prestigious competition calls the best producers who have achieved significant development and stability, presented new products and progressive developments on the market.

In 2014, “Kredmash” presented at the competition modernized asphalt mixing plant DS-185637 U with a capacity of 64 tons of mixture per hour, equipped with a computer control system and improved aggregates.

On November 20th, at the solemn ceremony of awarding the winners of the state rating of the best goods and services, our company received high awards - the Golden Winner Badge, Diploma and Certificate.

As the winner of the national rating of "100 best goods of Ukraine", PJSC "Kredmash" received the right to use the logo "Winner 2014" during the year at marking asphalt mixing plant DS-185637 U. 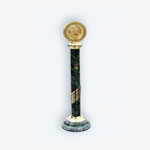 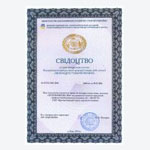 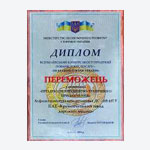