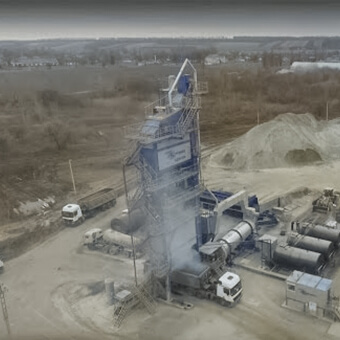 The history of the plant began in 1870, when the first production was manufactured: horse powers, threshing machines, chuff cutters and spare parts for them. This was the first company in Poltava province to produce agricultural machines, which also carried out orders for railways (Kharkov-Kremenchug and Elisavetgrad-Kremenchug railways passed through the city). The products of Bautz company (the first owner) were in great demand, the owner received large profits every year.

In 1994, the company was privatized. In May of this year, on the basis of the decree of the State Property Fund of Ukraine, the city council registered the plant as OJSC “Kremenchug Road Machines”, as a company with private property. The supply of asphalt mixing plants DS-168, DS-185 and KDM 201 for the construction of the international transport corridor that passes through Hungary, Serbia, Bulgaria and Romania was the breakthrough to Eastern Europe.

2006 was the stage of further takeoff. Active advertising and image work, the creation of new models of asphalt mixers promoted the increasing of orders quantity from consumers. 58 units were sold during the year. The volume of production increased by 13%. In 2006, new improved asphalt mixers KDM-20163 and KDM-20167 were offered to consumers, the first unit DS-1853M of increased mounting readiness was made. Forty-one of 58 sold units are equipped with a microprocessor control system, nineteen units with bag filters. This guarantees high environmental safety. Only for four years (from 2002 to 2006) were manufactured and sold 243 asphalt mixing and ground-batching plants.

Also, 2006 became the anniversary year for the most popular consumer goods a can sealer used for products canning with brand "Kredmash". Six millionth sealer was manufactured. Our can sealer is successfully sold not only in the Ukrainian market. Consumers of Azerbaijan, Moldova, Russia, and Kazakhstan purchase large lots of it. Demand for the can sealer never falls. For information, the production of this product has grown to 90,000 pieces per month in recent years.

The following company's awards "Leader of the National Business Rating", "Leader of the Industry", "The Best Employer of the Year" and others reflected the successes of 2006. In the same year, OJSC "Kredmash" confirmed the certificate of compliance with the international standard ISO 9001: 2000 and received a certificate from the world certification expert SGS Group of companies.

2007 can certainly be considered as one of the successful year of the last decade. Demand for road machinery of "Kredmash" brand has steadily increased. The portfolio of orders was formed for next six months. The plant sent 93 units to consumers for the year, including 25 asphalt mixers of new series KDM 201. New modifications of asphalt mixers: DS-16867, KDM 2013M, KDM-2017 were manufactured. The demand for increased mounting readiness units growth by seven times for several years. In 2007, was manufactured record number of asphalt mixer modifications - 21 (twice as much as in previous years).

High-quality components of leading foreign companies began to use at manufacture of new models of machinery. Total investment in the production improvement was to 14.5 million UAH. The profit received in 2007 allowed to increase the payroll fund by 55.7%.

All the main models of produced asphalt mixing plants - DS-168, DS-185 and KDM 201 were awarded the title "Best domestic goods" in 2007. The company received the status of "The Best Producer of Goods in Ukraine". OJSC "Kredmash" was awarded with the Honorary Diploma of the Cabinet of Ministers of Ukraine in connection with the 70th anniversary of Poltava region.

The company staff met 2008 with great hope, but it was the beginning of the crisis and undercut many plans. And still, successful work in the first half of the year, before the crisis autumn, allowed getting a decent overall result of the year. The growth in production amounted to 15.6%, output was 380 million UAH. The production and sales plan was 100% complete, 102 asphalt mixing plants were manufactured a record amount for the entire modern history of the plant. A new sample of the asphalt mixer DS-1683M with high mounting readiness was presented to operators. For achieved successes the company was awarded the honorary titles "The Leader of the Economy of Ukraine" and "Exporter of the Year".

In 2009 and 2010, OJSC "Kredmash" made great efforts to overcome the crisis and return to stable work. Despite the difficulties, the plant worked without stopping, the workers received their salaries in time. 26 units were sold in 2009 and 47 in 2010.

2010 is a special year in the history of the development of the Kremenchug plant of road machines. The company celebrated 140 years old. The team approached this date with stable work, strengthening its position in the market of road machinery.

133 asphalt mixing and ground-batching plants were sold in 2012 and 2013.
The asphalt mixing plant DS-18537A with a capacity of 56 t/h in automobile size was manufactured and sent to the consumer. The use of such unit will allow for greater savings in the transportation of equipment and make the PJSC "Kredmash" units more accessible to consumers.

High competition in the construction equipment market makes plant specialists to work on new, improved samples of products that meet the highest international standards. In recent years, improved modifications of the entire model range of plants have been proposed to road organizations: ground-batching and asphalt mixing plants of increased productivity, automation control level, with improved and fundamentally new units, with five-fraction screening system and an adjustable dosing system of stone materials.

On June 27th, the occupiers launched a rocket attack on Kremenchuk